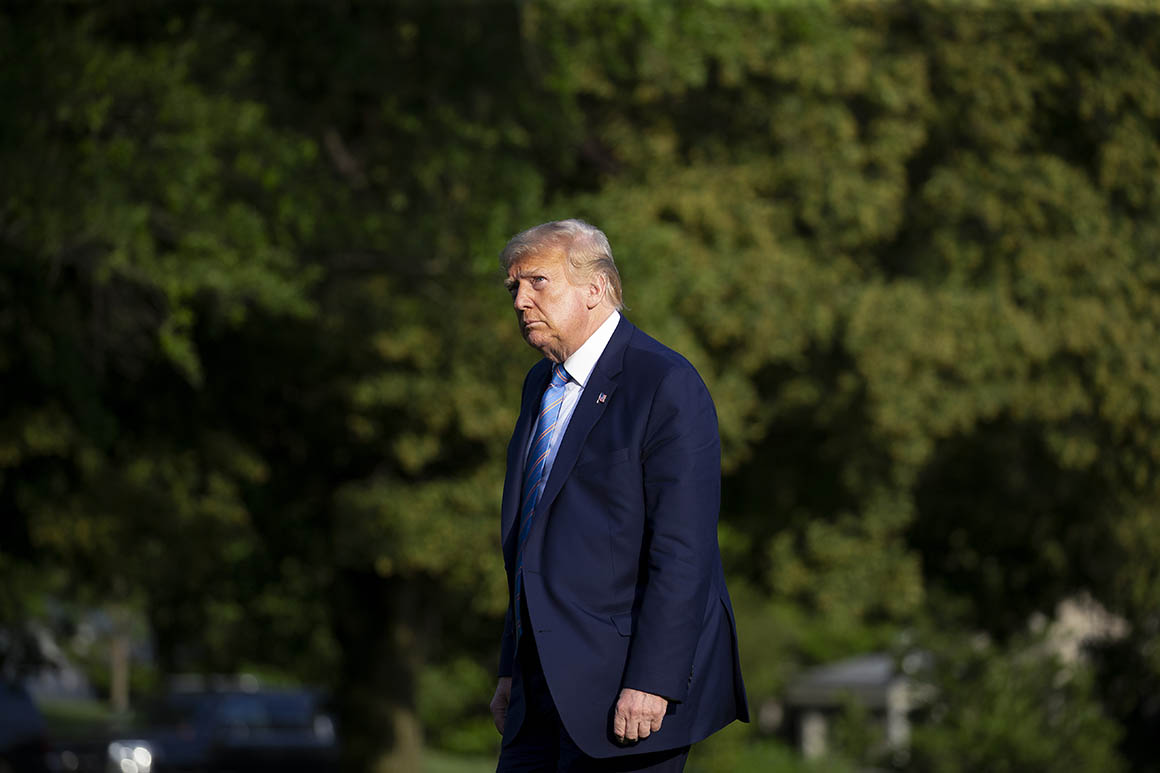 President Donald Trump on Monday claimed to be a victim of double standards when it comes to perception of his decision to resume campaign rallies in the midst of the coronavirus pandemic, declaring that attempts to “covid shame” his campaign “won’t work!”

In a tweet, the president complained about discrepancies in media coverage of his upcoming rally in Tulsa, Okla., compared to that of mass protests across the country over police killings of unarmed black Americans.

“The Far Left Fake News Media, which had no Covid problem with the Rioters & Looters destroying Democrat run cities, is trying to Covid Shame us on our big Rallies,” he wrote, continuing a pattern of failing to distinguish between the majority peaceful protesters and those who engaged in property destruction and looting at some of the events.

Efforts to shame his campaign, he added, “Won’t work!”

Public health experts have faced accusations of hypocrisy for backing the protests, spurred by the police killing of George Floyd last month, while criticizing smaller protests of state coronavirus restrictions. They've argued that protesting systemic racism is worth the risk, and that while still dangerous, mass gatherings are safer outdoors than indoors, as Trump’s rally will be, as long as demonstrators take appropriate precautions.

And the press has come under fire as well for its coverage of the protests, with less emphasis on the pandemic or the need for social distancing.

It’s the first time the president has personally vocalized the sentiment, which has been percolating on the right since he announced last week his plan to resume rallies.

Saturday’s rally, the first for Trump since coronavirus-related shutdowns began in March, comes as parts of the country see an uptick in infections — including Oklahoma.

Several states and cities have paused or threatened to pause the reopening process and lifting of restrictions as cases have begun to spike, raising fears of a potential second wave of infections. The president’s plans to resume rallies have faced pushback, and even his Centers for Disease Control and Prevention on Friday warned that large gatherings in confined places pose the highest risk for spreading the coronavirus.

Anthony Fauci, the nation’s top infectious diseases expert, also said Friday that attending any type of mass gathering, be it a campaign rally or a protest, is "risky" and that attendees who can’t or won’t avoid crowds should wear masks.

Over the weekend, Oklahoma’s top health official told the Tulsa World that he wished Trump would reschedule the rally for a later date, citing a “significant increase in our case trends.”

“I think it’s an honor for Tulsa to have a sitting president want to come and visit our community, but not during a pandemic,” he told the paper, adding that he had concerns both for rally attendees as well as the president himself.

The paper’s editorial board on Monday also pushed back on the rally plans, writing that due to a number of factors, “this is the wrong time and Tulsa is the wrong place for the Trump rally.”

In an acknowledgment of the continued risk of coronavirus, the campaign is making potential attendees agree not to sue if they contract the disease after attending the rally.

RNC Chair Ronna McDaniel raised a similar complaint to the president's in an interview on Fox News moments before his tweet.

Asked what — if any — health precautions the campaign was putting into place for Saturday’s rally, McDaniel said that she wasn’t in charge of planning the rally but predicted that those with the highest risk of contracting the virus would stay away from the rally and that anyone who felt the need to wear a face covering as the CDC recommends would be free to do so.

“It is interesting to see how we weren't hearing about this during the protest last week,” she went on, noting that African Americans have been disproportionately affected by the pandemic and accusing Democratic leaders of ignoring the issue of personal protective equipment at the protests. “It's funny that now we are having a Trump rally and we’re bringing people out to celebrate the nominee for their party, all of the scrutiny is coming up on this,” McDaniel said.